BCB International Ltd, A 165-year-old Cardiff-based manufacturer, have developed the world’s first solid bio-ethanol fuel dubbed the Firelighter of the future. As we know with the third wave of the pandemic staycations are going to reach an all-time high. With this comes a resurgence for both BBQs and fire pit socialising with families and small groups.

‘FireDragon’. Following extensive research, development, laboratory and field trials, the UK’s Ministry of Defence (MoD) were the first to adopt ‘FireDragon’ fuel. It has since been taken on by defence forces and adventurers alike around the world, and now everybody will now be able to get their hands on FireDragon for their BBQ’s and fire pits as a new retail range has just arrived in B & Q stores across the UK.

BCB International spokesperson, Paul Davies, said: “For far too long the public have had to put up with either bulky and dirty firelighters, many of which can produce toxic fumes. FireDragon is environmentally friendly. It is a safer and a cleaner alternative.”

The range includes Solid and Gel variants of FireDragon fuel making it ideal for any shopper who is looking for a greener, cleaner and safer alternative to traditional fire and BBQ lighters.

Indeed, it is so clean that it can double as an anti-bacterial hand cleanser; making it safer to handle.  FireDragon is supplied in attractive and easy to use bottles and pouches.

The UK Government published its Clean Air Strategy which outlined a number of measures it will take to clean up our air including the introduction of new legislation to prohibit the sale of the most polluting fuels.

Andrew Howell added: “Laboratory tests have exposed some of the toxic fumes and environmental health hazards associated with some of the traditional firelighters. They emit numerous toxins in the copious quantities of sooty smoke they bellow out”. 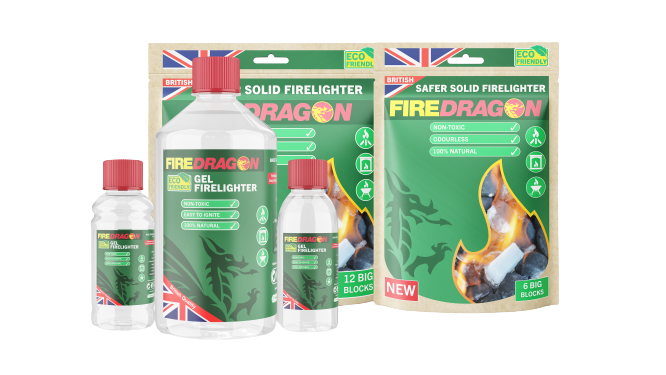